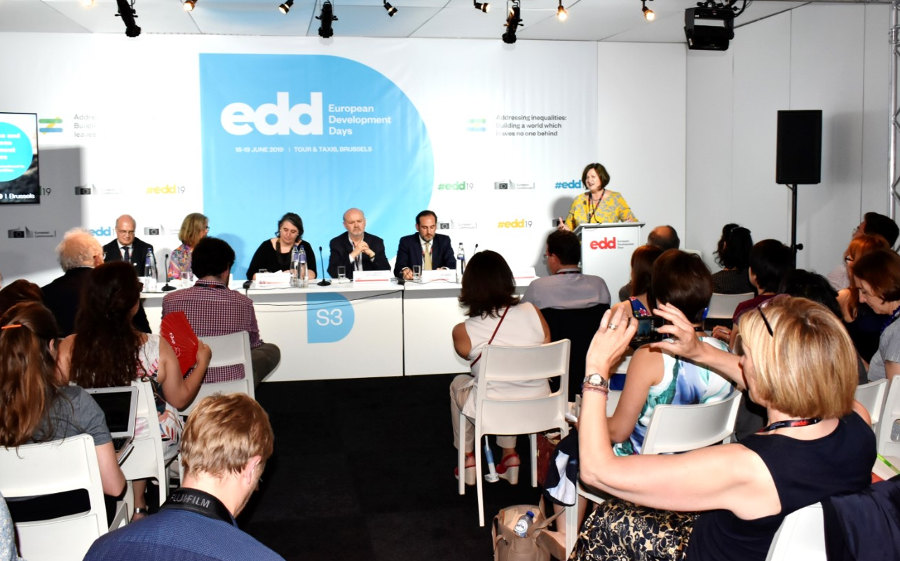 In line with the EDD’s main theme and agenda, which is ‘Addressing inequalities: Building a world which leaves no one behind,’ participants in the session discussed how increased public and private financial flows can help the world’s most vulnerable countries and communities at risk of being left behind.

DEVCO Director for Development Coordination in Latin America and the Caribbean, Jolita Butkeviciene, gave a warm welcome to the speakers and participants in the session, saying that “the topic of this year’s EDDs is very pertinent. Often the work done with financial institutions is not really perceived as addressing key issues to reduce inequalities and today’s journey provides us with a unique opportunity to showcase the positive impact that our joint work with financial institutions can have on tackling inequalities in our region. It will also show the value added by EU resources.”

According to Ms Butkeviciene, projects financed by LAIF and CIF and its partners must reach the most vulnerable, benefitting women, children and indigenous populations. “These projects have to make a difference and make our main partners, the International Finance Institutions (IFIs) as implementing agents together with our partner countries, go beyond what they would usually finance.”

Through their interventions, the panelists expressed in many ways how blending resources from the EU are really making a difference. Maria Shaw-Barragan, Director of the EIB’s Global Partner Countries department,, explained that "the financial institutions gathered here finance with values, the values for which the European Union has been working for the past 6 decades. Our funding seeks respect for human rights and the environment, aiming to combat inequalities and to ensure democracy.”

According to Fernando Jiménez-Ontiveros, General Manager of FONPRODE at AECID, “what the European Commission does is to sit different actors at the table, to promote political dialogue to support the reforms that will lay the foundations for governance, and to accompany the lending with know-how and technology. The private sector accounts for 70 % of growth and employment worldwide. Therefore, the exercise of co-responsibility is important, and this is what LAIF is doing. LAIF is supporting us in achieving environmental and social standards while making the change.”

For his part, Bruno Leclerc, Director for Latin America at the AFD, stated that “sustainability and impact are key to AFD’s strategy for the region. The advantage of LAIF and CIF is to give a more social and environmental vision in the projects we are preparing. For example, in Peru we are financing together with LAIF social and green housing, favoring disadvantaged sectors of the population."

Ignacio Corlazzoli, Representative for Europe at the IDB, noted that the IDB is running innovative projects thanks to the resources provided by the European Union through CIF and LAIF. Currently, the bank has financed two studies in Jamaica, one on access to financing, and the other on domestic violence. "These studies seek to change behavior and bring financing opportunities for small and medium enterprises led by women,” he said.

As Andrea Delbrueck, Regional Director for Latin America and the Caribbean at KfW, explained, women play a fundamental role in the Latin American economy, and projects run in partnership with LAIF and other financial partners are building capacities, bringing access to financial markets and supporting women entrepreneurs in setting up their companies.

The partnership established through the EU blending instruments was defined as a mutually beneficial relationship, since it has helped banks get involved in projects or sectors where they would not have gone alone; and it is helping banks expand their frontiers in terms of environmental objectives, social impact or risk levels.

Hear the audio of the session and see the pictures at: https://www.eudevdays.eu/community/sessions/1847/latin-america-and-caribbean-investment-facilities